For those of you who haven't seen it - which is probably most of you - the London Oratory has rather 'gone to town' on arranging the Church for the Beatification of the man who was, ultimately, responsible for its existence.

Not only are the usual elegant red-and-gold hangings up on the pillars around the Church - presumably at least mainly for the Solemn Mass on Wednesday at which Archbishop Nicholls will dedicate the new Altar in honour of the new Beatus - but they've even managed to obtain some weatherproof ones for the pillars on the frontage of the Church . . . and completed the array with a gigantic pictorial banner in the style of the ones that used to be put on the frontage of S. Peter's for canonizations ! 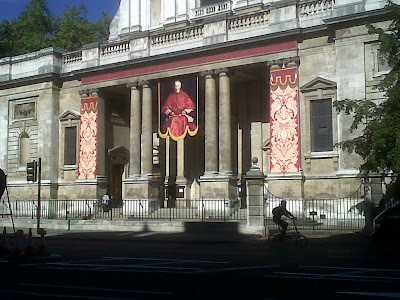 And of course, so that the statue of Blessed John Henry outside the gates of Oratory House doesn't feel left out, they've even put a set of pillar hangings there too ! 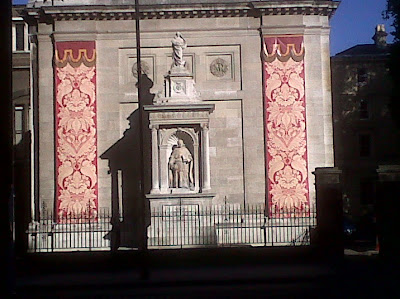 (I don't know where they got them from, Fr Tim; but I have little doubt that F. Rupert could tell you, and that they manufacturers could provide a nice set of the blue-and-silver ones which the Oratory uses for Feasts of Our Lady in the appropriate sizes for the outside of Our Lady of the Rosary, Blackfen . . . and for the Presbytery and the Social Club as well, if you fancied it !)
Posted by Dominic Mary at 12:00