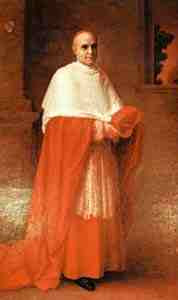 ‘Fr De Ravignan, a great French Orator . . . famously said that we now have the proverbial “enemy within”. We have people who claim to be Christian, even Catholic, but who are caught up in a web of illusions and arbitrary speculations, and who concoct their own ideas about religion and Christianity to suit their own lights . . .

What will be characteristic will be the indifference to absolute, revealed, truth. People will no longer believe that truth can be pinpointed. They will allege that everything about truth is generically elusive. There will no longer be any objectively binding duties and obligations. Rather souls will dip into what flatters and caresses them, nothing more than vague religious feeling will hold sway, and it will be no more or less than the play-thing of the fluctuations of character, temperament and skeptical rationalism. There will be no solidity, no purpose, no fruits.’

So said Rafael, Cardinal Merry del Val, in his speech to the International League of Catholic Women in May 1922.

Thinking of some of the things going on nowadays (see here for just one example), does it just vaguely look like prophecy ?
Posted by Dominic Mary at 09:00