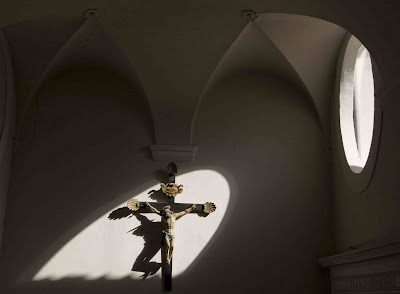 This amazing photo was taken on Sunday by dear fr Lawrence Lew OP in the Priory of S. Sabina in Rome, and is the crucifix on the landing outside S. Dominic’s cell . . .

I don’t very often post photos for the sake of the picture, but rather because of what they add to what I’m writing : but today I want to try and add a simple thought or so to this truly wonderful photo.

At the end of his life, Holy Father Dominic showed the absolute extent of his poverty by not even possessing a cell in which to die, or an habit to wear . . . such was his insistence on maintaining, always, total dependence on those to whom he felt called to preach : and fr Damian Byrne OP, who was the eighty-third successor of S. Dominic, suggested that his insistence on this was ‘intimately connected with his desire for apostolic freedom’; an idea which Cardinal Villot echoed in his assertion that S. Dominic was ‘stupefyingly free’.

That freedom was not only S. Dominic’s, though : it wasn’t even particularly that of the Apostles, whom he felt called to follow in this way . . . it was ultimately Our Blessed Lord’s, Who was so free of the bonds of this earth that He could give it all up for us, not just giving it up, but doing so in such a terrifying and awe-inspiring way.

Look at this image : see the formal, symbolic, figure of the crucified hanging there . . . and then look at His real image in the shadow cast by the light . . . a figure in torment, and yet open to total abandonment for our sake.

That freedom from all except the desire to do God’s will was what Jesus made incarnate; and what inspired S. Dominic to his life of itinerancy : which not only gave him true freedom to preach, but also a real ability to read and understand the signs of the times so that he could preach appropriately to them . . . a quality which Henri Lacordaire described as ‘the grace of understanding the present century’ – for without that, which may well be an agony, the preacher cannot contemplate sufficiently acutely to be able to interpret the mind of Christ for, and then convey it to, today’s world.

The crucifix is obviously of its period : the image caused by the light is a more stark, abrupt, challenging one . . . the image of Christ’s passion which S. Dominic, in an odd way, gives to today’s world.

Let it inspire us to free ourselves completely of those undesirable things that are increasingly common : the bonds to the things of this earth which serve to keep us fastened outside the heaven which is meant to be our eternal home . . . a home in which I pray I shall, one day, meet you all.
Posted by Dominic Mary at 08:00