Well . . ! I've never done this before; but someone posted an 'Anomymous' comment on my blog the other day which I think deserves consideration : and as it wasn't directly delated to the post to which it was a comment, I have removed it, and am discussing it as a separate post.
The comment (I have only changed it by correcting one or two typos) read :


"Sick ! Never have I seen such evil in my life as this 'Papal visit'. Roman Catholicism is pure blasphemy - pure and simple : the idolatrous worship of the RC Pope over Jesus Christ."

Now; as I said, I don't think it was directly related to the post to which it was a comment, which was the post about the external decorations on the London Oratory . . . unless, of course, the commenter was under the impression that the portrayal of Blessed Cardinal Newman was the Holy Father : in which case all s/he was doing was displaying gross ignorance . . . but, as I say, I don't think that was the point.

However : in that case it leaves one wondering just how the commenter thinks that the Holy Father was worshipped . . . idolatrously or otherwise : and I certainly cannot understand how that 'worship' suggested that the Holy Father took precedence over Our Blessed Lord and Saviour, given the obvious reverence which he always showed for Our Lord in every manifestation. (I don't, hwoever, take issue with the expression 'RC Pope', because of course there are other uses of the word 'pope' in other Christian denominations.)

As for the suggestion that Catholicism - Roman or otherwise - is 'blasphemy', I am totally at a loss. I'm not suggesting that it is alone in Christianity in teaching proper respect and reverence for Our Blessed Lord, His Father, and the Holy Ghost; but to suggest that this respect and reverence is blasphemous is merely to display ignorance, surely ?

So : the Holy Father's visit was 'evil', was it ? Well, it would be fascinating to know exactly how . . . but that, of course, is simply another unanswerable (in any meaningful sense) question.

Now : I can almost hear you asking why I am bothering to dignify this comment with consideration; and I agree that at first sight there is not much purpose to it . . . but in fact it's just a peg; a peg on which to hang another, if slightly briefer, thought : my thoughts about the idiotic remarks which have been promoted over the last few days by such people at Stephen Fry and
Posted by Dominic Mary at 18:00 No comments:

I’m much impressed by the numerous thoughtful comments on my post ‘Oh Dear . . .’ of yesterday; and there are one or two points which they have raised which I should like to take up in due course.

However, I was pondering over it yesterday, and it seems to me that there is a very dangerous potential consequence of holding the position under discussion – the ‘canonisation’, if you like, of tradition over Papal authority – namely that if it is developed to its logical conclusion it can lead to a position which it would be very hard indeed to justify.

The argument is that tradition is superior to Papal authority, so that the Pope is unable to interfere with any established traditions of the Church.

Well, to consider but one example, I think that position has only to be considered to be dismissed as utterly unacceptable.

The ‘tradition’ that the Jewish people were wholly responsible for the death of Our Lord is a very ancient one, and was until comparatively recently enshrined in the liturgy of one of the most sacred days of the year.

However, regardless of what popes before them had done, Popes since B. John XXIII have seen fit to amend the Good Friday liturgy to eliminate the phrase ‘perfidious Jews’ (and have made various other pronouncements) to ensure that neither the Catholic Faithful, nor anyone else, is misled about the Church’s attitude towards the Jewish people; because, whatever the theological background to the expression, its use nowadays implies many things which the Church does not believe, and does not wish to appear to imply that it believes.

Now the extreme traditionalists would, presumably, suggest that this should not have been done, because the perfidy of Judaism was part of the tradition of the Church, and so was simply not capable of being changed . . . but that surely has only to be stated to be seen to be unreasonable. The Church’s understanding of this matter has developed dramatically in the last fifteen hundred years; and to suggest that it cannot express those developments, so that the great love of God is made fully known to all mankind, is not only ridiculous – it is also offensive : because it suggests that it is more important to maintain some historical theological position than to represent God’s infinite love and mercy to ALL His world.

So : whilst the Pope does not have (as one of my commentors properly reflected) to ‘go off on a frolic of his own’ (to use the English legal phrase), he has every right to prune, fertilise, and cultivate the Deposit of Faith so that the truths of the Faith are always applicable to the realities of God’s world providing only that he does not actually change it bodily - and that is, ultimately, between him and God. 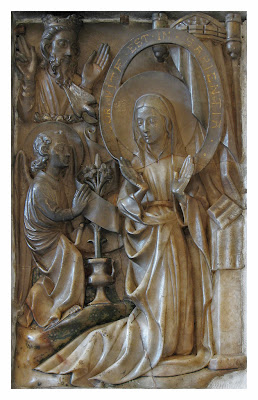 So, whilst we rejoice today in the grandeur and wonder of God’s wonderful majesty for His world as it is shown today, let us also try to remember that, at least in the very start, it was simply a very quiet and private thing . . . the magical, and yet magnificent, generosity of His infinite generosity which Our Lady encountered totally privately in her Son’s first beginnings in her womb.
Posted by Dominic Mary at 18:00 1 comment: 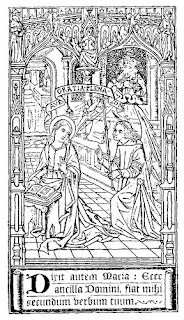 You look at this, and realize that in reality there was nothing outwardly grand about it all . . . just a little girl who had a discussion with an Angel of God : and that was that . . . the rest was, in one way, very quiet; and in another the most fundamental of all moves from God.

Today is her day; her day of rejoicing in what, I strongly suspect, was solely and exclusivelt a private magic of hers . . . a day all her own, and without any involvement, or discussion, in anyone else's.

Perhaps it's a good thing  to remember that we all benefit from at least some private involvement in God's world.
Posted by Dominic Mary at 08:00 No comments:

Getting Ready for a special day . . .

Tomorrow is one of those days in the Church's year which we all like . . . and even if it’s not quite obvious, simply because although we obviously know exactly what it’s all about now, it’s very hard to understand what it was about then . . .

But at the same time this is one of those things which probably didn’t make particularly sense at the time, precisely because for a newly-conceived girl there was little or nothing absolutely apparent . . . just concepts, and thoughts, and private things to think about.

And in an odd way I try to remember that this is something which is true for all of us . . . that we don’t know the important things until after they’ve happened; which is a difficult thing for us to get our minds to get round, but which is, nonetheless, entirely sensible in the context of reality.

The lovely Dominican lady 'Rosamundi' was now emailed to let us know that the Dominican Ordo for the UK is now readiily available . .

So do please contact them the website
http://www.lulu.com/product/paperback/op-ordo-2011/13999510
and I am sure that they will do their best to ensure that you have it as quickly as possible.
Posted by Dominic Mary at 13:49 No comments:

And another splendid Saint . . ! 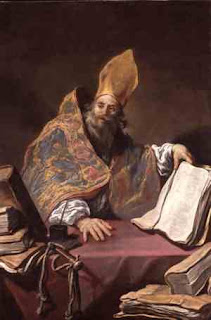 He gave much preaching and teaching on which the early parts of the Church's were based, and was largely responsible for ensuring that unified teaching and theology were encouraged and perpetuated not only for his time, but for the time to come.

Let us pray that the Church will always be provided with people to match his teaching, preaching, and faithful theology so that the wisdom of God's love is always perpetuated in the Church's fidelity today, and eternally.
Posted by Dominic Mary at 09:15 No comments: