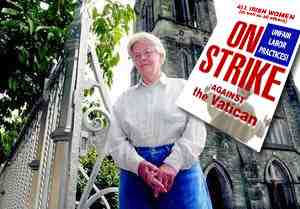 There are times when you seriously wonder whether you have completely lost the plot, and begun to hallucinate . . . and when I read this remarkable blog post I truly wondered whether I had taken leave of my senses : it is just so stupid.
In fact, if it hadn’t been the lovely Mary Regan’s blog, I think I’d have come to the conclusion that it couldn’t be completely believed : but because Mary wrote it, I know that it can . . . so I do.

An Irishwoman, the mother of a monk, is trying to persuade Irishwomen to boycott the Mass tomorrow as a way of persuading the Church to recognize that it must ordain women . . . in other words, her commitment to Catholicism is to encourage her sisters to commit the wholly pointless mortal sin of missing Mass, in order to try to achieve something which the Church has already said is not within its power to provide.

My only comment is that encouraging others to ignore the commandment to hear Mass on Sundays suggests – indeed at least arguably proves – that the lady in question simply has no grasp of the fundamentals of Catholicism . . . in which case the rest of her arguments are inherently unreliable.

There are other Churches which already subscribe to the principles which she – and those like her – promote. Why don’t they just go to those – failing as many of them are – rather than seek to create strife and dissension in the Catholic Church ? It would be so much easier – for them, and for everyone else.
Posted by Dominic Mary at 22:05