Cardinal Mahony of Los Angeles is not my favourite prelate. Come to that, he’s not the favourite prelate of a lot of other decent Catholics . . . although I have to say that when I lived in LA there were quite a number of people who did seem to think he was wonderful; not least the tall blonde lady in tight jeans and a short T-shirt who turned out to be a nun, and something to do with the Archdiocesan Liturgical Commission !

However : when you look at this photo, you begin to realize just how much damage people he, and others like him, have done to the Church . . . 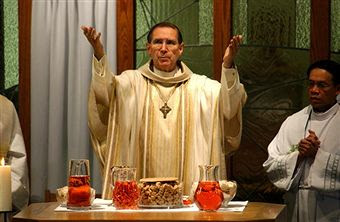 I make no further comment, except to suggest that none of the matter looks even remotely like proper Eucharistic matter – indeed the ‘bread’ looks like poppadums, to my eyes, and the ‘wine’ like watered-down Ribena : and as to the vessels, well as far as I can see they’ve been carefully chosen to break every single requirement of the relevant legislative text, Redemptionis Sacramentum.

Cardinal ? Frankly, if he was in the UK, I think that the Faithful could probably bring an succesful action against him under the Misrepresentation Act 1967 . . . because his adherence to the laws of Holy Mother Church is close to zero, which strongly suggests that he cannot properly be described as a ‘hinge’ on which the Church properly hangs.

His fairly imminent departure from LA is, it seems to me, something for which we should all give thanks to God - and to the Holy Father !

. . . and thanks for the photo to Grandma Snark, of ‘Extra-Ordinary Monkey Business’ . . . which describes itself as ‘Devoted to Liturgical Abuse’, but I think (hope ?!) probably means ‘Dedicated to Eliminating Liturgical Abuse’ !