At the risk of starting another agonised debate . . . 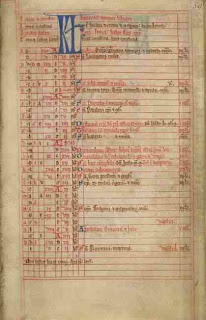 I have been wondering whether, post Summorum Pontificum and the re-establishment of the Extraordinary Form as an ‘ordinary’ part of the Church’s life, there isn’t at least some degree of argument in favour of a review of the Kalendar . . . in this case in favour of arriving at a single Kalendar for all forms.

It just seems to me that there’s little purpose, and no real merit, in having two different Kalendars for the two Forms. I’ve never quite got my head round the reasons why the changes were made so as to produce the ‘new’ version; and it seems to me that there might be merit, if one is going to review the whole question, in allowing people to say their piece about the options before a decision is made . . . but the crucial point is that I simply can’t see any merit at all in having two different – often only very slightly different – Kalendars which create particular difficulties for parishes and churches where both Forms are used on a regular basis.


The same, of course, might be said of the three pre-Lenten Sundays of Septuagesima, Sexagesima, and Quinquagesima : I express no opinion on the merit or otherwise of retaining them, restoring them, or abolishing them utterly : but I do think that there’s even less merit in having two completely separate approaches to the Holy Fast than whichever of those you personally detest most.
So : what do you think ? Can you explain why there need to be two different Kalendars ? What is the merit in having a situation where someone who regularly says the Office can quite easily find him/herself out of step with the Mass he hears on a given day because it is in the other Form to that of the office book used ?
Your thoughts will be welcomed.
Posted by Dominic Mary at 18:00