All about a Rosary 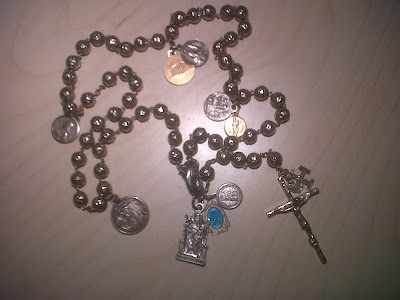 The remarkable American blogger The Crescat has just posted a really lovely post about the Most Holy Rosary : in her case with a photo of her own rosary, because – as she says – you ask someone about their rosary, and you usually get a story.

So, following her suggestion, here’s a photo of one of my rosaries : not, I hasten to add, the one I use all the time, simply because of how precious it is to me . . .

In fact it’s the Rosary I bought my late wife on the day after our wedding, in Walsingham : and the first Walsingham medal on it, the one with the blue enamel centrepiece, she bought that day to remind her of where it came from. The little round Walsingham medal at the same point I bought on the day after her funeral, when I took the flowers from her coffin to the Holy House . . . remember that I was an Anglican at that point; which is why there is also a large round one at the end of the first decade which was put there to commemorate having been to the 60th Anniversary of the Translation of the image from the Parish Church to the Shrine (in 1991), and the actual ‘statue’ of OLW is one I bought and put there to celebrate having been to the 75th Anniversary in 2006.

The various French medals commemorate various visits; but the two little crosses attached to the Crucifix she wore on our Wedding Day : ‘something old, and something new’ – the old one having been my Great-Grandmother’s as a little girl.

Anything else ? Well, the beads are obviously roses : but the Crucifix . . . yes, that’s incredibly special, because that was what she had to her lips as she died . . . which is why I don’t use the Rosary all the time; but treasure it beyond anything I can ever say; except that I suspect that you can probably imagine why.