A Precursor of S. Dominic ? 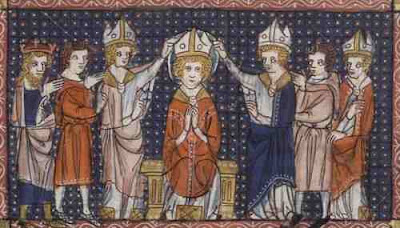 Today is the Memorial of S. Hilary, Bishop of Poitiers from 350; and I was struck this morning by the passage from his treatise ‘On the Trinity’ which formed part of the Office of Readings.

He says 'The gift of speech which Thou hast bestowed can bring me no higher reward than the opportunity of service in preaching Thee and displaying Thee as Thou art, as Father and Father of God the Only-begotten, to the world in its blindness and the heretic in his rebellion’ – a comment which I am sure that S. Dominic would have echoed wholeheartedly..

Earlier this evening I was reading a recent post on Fr Paul Johnson’s blog, where he was commenting on another priest’s post about the need for priests to continue to study, because it was important to their preaching; and I made a comment that whilst this was undoubtedly true – as was the need for proper preparation – I thought that there was also much value in contemplation as an element of good preaching, as evidenced by the Dominican motto ‘Contemplata Aliis Tradere’ – to contemplate, and pass on the fruits of that contemplation to others.

When I wrote that comment, I’d obviously forgotten this morning’s Reading, despite already having made a note to use it as the basis of a post this evening : what a fickle thing memory is ! However, I’m making up for it now.

Preaching is, of course, something which - in one sense - the clergy do at Mass : but in fact it's not only that, but also everything which any Catholic does to pass on the Word to the world. The Dominican aim is for every part of life to be 'a holy preaching'; and that is not exclusive to clergy, or religious, but applies to us all. In order to do that, though, we have to be informed about our Faith; but we must also continue to study it throughout our lives, and continually contemplate both it and the world in which we live, so that we can relate the two.

The passage from S. Hilary ends with a prayer which, in light of that thought, I believe not only preachers, but all Catholics who want to be able to explain and defend their Faith - which ought to be all of us - could well make their own (and which includes quite a lot of things which are important in addition to study, prayer, and preparation) :

‘Grant us, therefore, precision of language, soundness of argument, grace of style, loyalty to truth. Enable us to utter the things that we believe, that so we may confess, as Prophets and Apostles have taught us, Thee, One God our Father, and One Lord Jesus Christ’.